Liverpool’s pre-season got off to a perfect start on Thursday evening, as the Reds cruised to a 6-0 victory away to Tranmere Rovers. 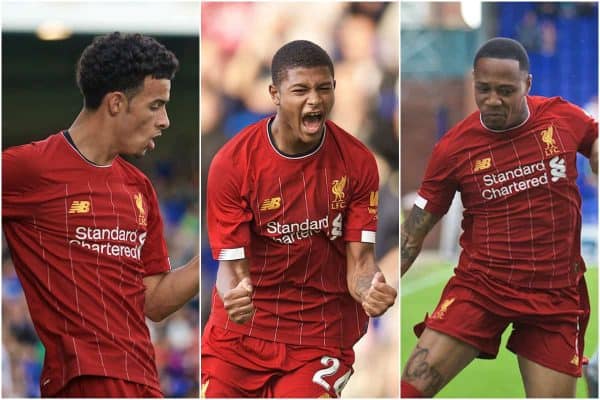 Brewster Off to a Flier 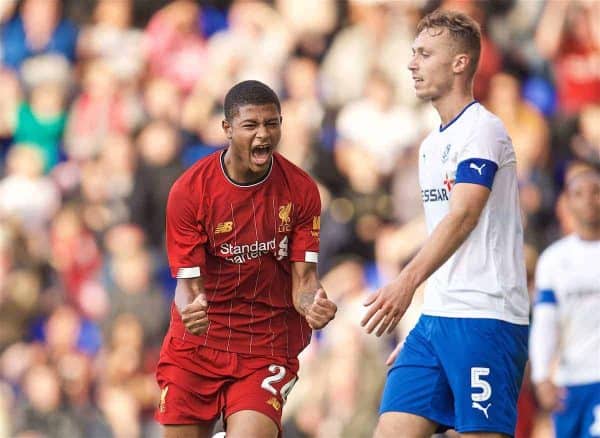 Despite Liverpool’s squad being littered with world-renowned European champions, the player many have been most intrigued to watch this summer is Rhian Brewster.

The 19-year-old has overcome a long injury absence to return to full fitness, and with Mohamed Salah, Sadio Mane and Roberto Firmino not around, he was given an immediate chance to shine.

Leading the line in the opening 45 minutes, as Jurgen Klopp fielded different starting lineups in each half, Brewster was Liverpool’s star man.

The match was only five minutes old when the striker made his first significant impact of the summer, teeing up Nathaniel Clyne to fire home the opener.

Brewster then got in on the act himself, showcasing his Robbie Fowler-esque ruthlessness and pouncing twice inside the area to put Liverpool 3-0 up.

While his goalscoring instinct was encouraging, it was the all-round aspect of Brewster’s play that particularly shone through.

He dropped deep and got involved in moves, producing one lovely flick to the on-rushing Harry Wilson, and he played with a confidence reminiscent of a young Fowler.

Brewster is special, and this was the ideal start to his pre-season, as he looks to show Klopp that he could be Firmino’s deputy in 2019/20.

The exit of Alberto Moreno to Villarreal has left Liverpool with no backup to Andy Robertson at left-back.

While some have voiced concern about not bringing in a replacement for the Spaniard, Klopp is reportedly willing to audition both Yasser Larouci and Adam Lewis this summer.

It was Larouci who started proceedings at Prenton Park and he did his future chances no harm, albeit against noticeably inferior opposition.

His performance was full of attacking verve, combining blistering pace with directness and link-up play.

Larouci was denied by Tranmere goalkeeper Scott Davies after a neat one-two with Adam Lallana and he also found himself in a great position eight yards out, before firing over.

The teenager’s end product may have been a little on the raw side, but his reputation has grown in one 45-minute cameo.

Lewis, meanwhile, also looked the part when introduced in the second half, spraying passes and making one thumping tackle.

He was arguably the more assured on the ball out of the young left-back pair, on a night when both shone. 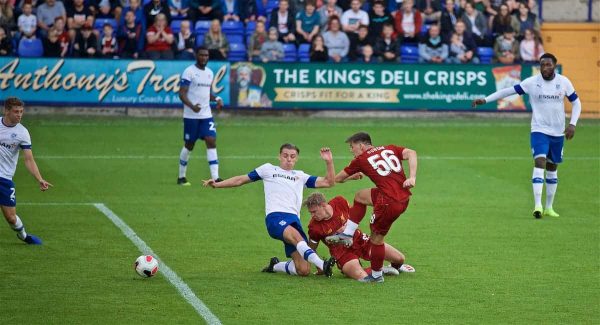 While Brewster and Larouci were the standout youngsters, there were others in either half who looked like they had a point to prove.

Wilson looked classy during his first-half showing—Ryan Kent less so, in truth—linking well with Brewster and often cutting inside from his right-sided role.

Nathaniel Phillips was assured, if untested, alongside Gomez, while Ben Woodburn and Curtis Jones combined for Liverpool’s fourth goal, scored by the latter.

Arguably most impressive in the second half was Ki-Jana Hoever, who continues to look a stunning prospect.

The Dutchman shone at right-back, making one storming run that led to fellow teenager Bobby Duncan bagging the Reds’ sixth and final goal of the night.

A number of those mentioned above may end up being shipped out on loan this season, but this is still a wonderful opportunity to catch Klopp’s eye.

Their attitude was excellent and the quality on show was further proof of the talent being unleashed from the academy these days. 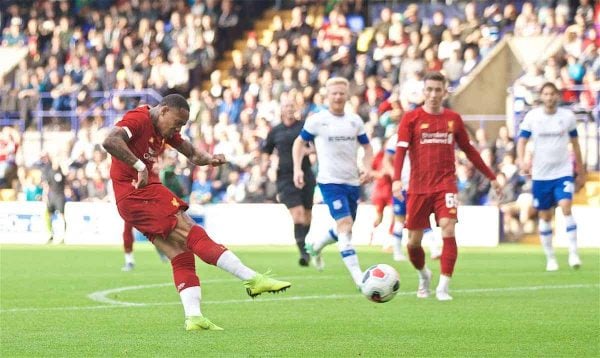 Nathaniel Clyne‘s last appearance in a Liverpool shirt came against Man United last December, prior to being deemed surplus to requirements by Klopp.

An unspectacular loan spell at Bournemouth followed, and as the summer has rolled around, his future at Anfield remains uncertain.

Liverpool may accept a bid for the right-back but they are in no rush to sell him; on Thursday’s evidence, keeping him may be the better option.

It must be stressed that Tranmere offered little throughout, and the match was a long way from an intense Premier League game, but Clyne did his chances no harm—he was as assured and unflappable as in his brief run in the side back in December.

Not many would have backed the 28-year-old to be Liverpool’s first scorer of the summer, but his rifled finish was one that Trent Alexander-Arnold would have been proud of.

In general, Clyne cut a slick figure, and while he was rarely tested defensively, he looked in good shape.

Would it really be problematic keeping hold of him and giving Alexander-Arnold a natural deputy, rather than using Joe Gomez or James Milner there?

Daniel Sturridge, Simon Mignolet and Divock Origi have had changes of heart in recent summers and stayed to fight for a place; perhaps Clyne could become the latest senior to do so.

This was the ideal way for Liverpool to begin pre-season, in what was one of the most one-sided friendlies in recent memory.

Klopp made a point of saying it was essentially a training session, although he will be buoyed by what he saw from a number of players.

Despite many positives on the night, it would be reckless to go overboard about the result, or over-hype the impact of individuals.

There are bigger tests to come, not least on the upcoming tour of America, and Klopp will not get carried with what he saw.

Then again, a 6-0 win to kick off the summer, with Brewster shining, Champions League hero Divock Origi netting and a clean sheet recorded is not a bad start.

As an added aside, the sight of goalkeeper Dan Atherton playing on pitch late on, replacing the injured Paul Glatzel, was a real highlight!

⭐ Enjoying our independent Liverpool FC content? Support what we do, get an advert-free experience and enter exclusive competitions with This Is Anfield Premium. Try free for 30 days.