Curtis Jones has been handed a bigger responsibility with the Liverpool under-23s this season, and stepping up should pave the way for a first-team role. 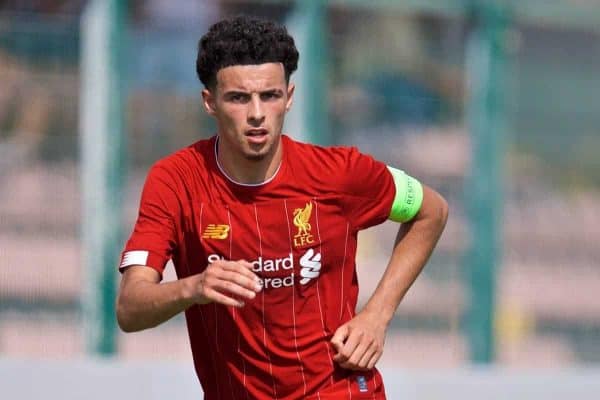 It will have come with disappointment for Jones when he was cut from the senior squad in the final weeks of pre-season, leaving ahead of the friendly loss to Napoli in Edinburgh.

Jurgen Klopp‘s explanation that he and his staff didn’t “need the numbers” as Naby Keita, Xherdan Shaqiri, Mohamed Salah and Roberto Firmino returned for the training camp in Evian.

Jones had impressed prior to that, and set his sights on a Premier League debut with the Reds in the coming season, which will have only heightened the sense of frustration as he reported back to Kirkby.

But a shift in the academy ranks, prompted by the departures of Corey Whelan and later George Johnston, saw Jones’ importance to the U23s increase.

Neil Critchley handed the teenager the captain’s armband ahead of the trip to Chelsea in mid-August, days after he signed a new long-term contract with the Reds, ending Pedro Chirivella‘s temporary reign.

It was a clear sign from both the club and his coach: there were still big plans for Jones, despite the setback of his summer demotion.

“I thought it would be the right thing to do to give Curtis some added responsibility and try to develop his leadership qualities within the team,” Critchley explained of his decision.

The U23s manager praised Jones as a “technical leader” for his side, but also a player with a “good football brain,” with the duty of passing that on to his team-mates “in the good moments and the bad moments” designed to help him “grow as a person.”

“You forget he is young at just 18, so to add that little bit of maturity to his game and a bit of responsibility I hope will help him,” he added, with the reminder of his age important.

Jones has been around the first-team squad since the beginning of 2018, when he and Rafa Camacho fleshed out Klopp’s ranks, travelling with the senior side for games at home and away, including to the Champions League final in Kyiv.

The midfielder had only turned 17 shortly before his call-up to Melwood, and at that stage, he looked every bit his age.

His versatility, fleet of foot, willingness to dribble at defenders and eye for both a pass and a shot allowed him to slot in alongside his elder counterparts, but Jones had not yet developed physically or mentally.

Just under a month on from taking the captaincy, however, and after a summer that saw him fill out significantly, he is now pairing these qualities with a more intelligent, composed approach.

Liverpool’s starting lineup for their UEFA Youth League opener at Napoli on Tuesday afternoon may have been filled with familiar faces, but Jones remained their leader.

He stood with an authority over the likes of Ki-Jana Hoever, Yasser Larouci, Leighton Clarkson, Jake Cain and Harvey Elliott—the latter whom he joined in an unorthodox pairing up front.

It was a difficult game for the young Reds, with Critchley and Barry Lewtas fielding a 3-5-2 formation that suppressed the influence of Larouci and Neco Williams as wing-backs and asked too much of Cain and Elijah Dixon-Bonner in midfield.

The under-19s went in at half-time 1-0 down, and deservedly so, their best chance coming when Williams nodded against the bar from Larouci’s cross; Jones and Elliott, removed from their natural wide roles, struggled for fluency.

But they emerged from the break with a sense of urgency, and this was led by the roaming Jones, who was at his best on the introduction of an out-and-out striker in Layton Stewart.

Elliott ultimately lay on the equaliser for the substitute, but it was his captain who inspired the comeback, setting the tone on and off the ball.

There were fewer meandering runs into danger many have come to expect from Jones, with his priority keeping the ball and creating openings for his team-mates.

While the rest of Lewtas’ side duly headed back to the centre circle after Stewart’s leveller, Jones made a point to congratulate the 17-year-old, the significance of the moment not lost on the midfielder.

Having made the step up from under-16s to under-18s this season, assuming the goalscoring mantle of Bobby Duncan and Paul Glatzel, Stewart scored a crucial goal just 16 minutes after coming on in Naples.

It was the marker of a captain’s responsibility that Jones applauded his younger colleague in a moment he would savour.

This was further demonstrated as Liverpool pushed for a late winner, not only keeping his head when his side lost the ball, but tracking back to regain possession in order to keep momentum.

Though the young Reds were left to share the points, Jones’ performance should have caught the eye of those higher up.

Next Wednesday night brings an interesting quandary for the club’s coaching staff, from the first team to the academy, as the League Cup third-round tie at MK Dons clashes with the EFL Trophy trip to Fleetwood Town.

Both fixtures will see Liverpool come up against League One opposition, and the likes of Hoever, Larouci, Elliott, Sepp van den Berg and Herbie Kane could be considered for either.

In Jones’ case, it may be beneficial to allow him to vacate his role as under-21s captain for the night, instead rejoining the first team—with whom he has been training of late—at Stadium MK.

Competition for places in both of his best positions, on the left and advanced in midfield, is certainly rife, and Shaqiri, Alex Oxlade-Chamberlain and Adam Lallana are among those who will hope to start in a rotated side.

But if Liverpool have designs on a long-term spot for Jones on Merseyside, his progress could be aided, like Rhian Brewster, with an inclusion in Milton Keynes.

It would be just reward for his rising to the challenge since pledging his future to the club and turning down a loan move to Fleetwood to serve as Critchley’s captain, and serve as another symbol of their faith in the teenager.

“We all know where Curtis wants to get to,” the U23s coach concluded last month, “it’s how we are going to try to help him to get there.”