Alisson has begun light training outdoors as he continues his recovery from a calf injury, but Liverpool remain in no rush to bring the Brazilian back in. 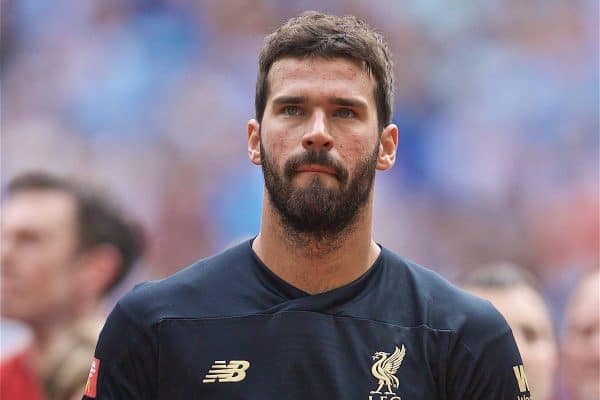 The Reds appear to have learned their lesson from a PR perspective when it comes to injuries, after setting optimistic timeframes in recent years.

Setbacks then serve as further disappointment to fans awaiting a player’s return, and therefore a more vague approach may be the best way forward, as they are taking with Alisson.

The hope is that the No. 1 is back towards the end of this month or the start of October, after suffering the injury during the opening-night Premier League victory over Norwich last month.

Alisson has been working with rehabilitation fitness coach David Rydings throughout the international break and has posted positive updates from Melwood on his Instagram.

And speaking to LiverpoolFC.com, goalkeeping coach John Achterberg revealed the 26-year-old has been “out on the pitch” as his recovery progresses, but they are taking “each day as it comes.”

“Ali has been working with Dave in the gym a lot to improve the strength and try to keep the fitness levels up,” Achterberg explained.

“In the last few days he has been out on the pitch to do some catching and footwork, as well as small passing drills.

“He has made steady progress, but it is difficult to say how long it will take or how it will progress.

“It needs time and we cannot look too far ahead, so we take each day as it comes, see how he feels, and then make progress from that.”

It is an encouraging update from Achterberg on the Reds’ first choice, but initial hopes he would be back in time to play Newcastle at Anfield on Saturday are clearly far off.

Instead, it could well be that Liverpool wait until after the next international break, and the trip to Man United on October 20.

There is faith in Adrian to perform as Alisson‘s stand-in—though Achterberg conceded that “it is really difficult for anyone to replace Ali”—and the Spaniard will continue between the sticks until his return.

Adrian, Andy Lonergan and youngster Jakub Ojrzynski have been training at Melwood throughout the international break.